OXY BLAST PLUS BENEFITS TO DAlRY Clean water will increase the water intake per cow per day. We know when a cow drinks more water she eats more feed and produces more milk We have seen excellent responses in herds that use Oxy Blast Plus in the prevention of sub-clinical and clinical mastitis; breeding diseases associated with uterine infection, the number of services to settle delayed heat cycles; and also leg health problems such as hairy warts, abscesses, or foot rot. Oxy Blast Plus will flood the body with oxygen on a daily basis and stabilize the immune system response. It will build the hemoglobin, which is the oxygen and nutrient carrying capacity of the blood. When we do this, we allow the body's immune system to function more normally on a daily basis rather than go through peaks and valleys based on how well the cow is digesting her feed. Also, when a cow is under stress, she may eat her feed but, not digest it as well as she could, so the manure will be more inconsistent in texture and color. Oxy Blast Plus in the water helps alleviate the stresses. Oxy Blast Plus will pay for itself many times over - first of all through gaining higher milk yields. We have seen increased milk yields as high as 2 - 5 lbs./cow/day! Second of all, the producer can earn more premium dollars every month on their milk check based on every 100 lbs. of milk sold. Next, Oxy Blast Plus will allow the cow to digest the feed more efficiently because she is not fighting infection, so it will take less feed to get a pound of milk. The cow will come in and freshen and peak higher in her lactation and hold the higher production longer into that lactation. And last but not least, Oxy Blast Plus will allow the cow to clean better after she freshens. Not having uterus infection will eliminate the need for the vet to come out and clean the cow manually and it will also help her to eat better shortly after freshening and start digesting the feed more efficiently from the onset of the lactation. Oxy Blast Plus will also lower and treat the onset of hairy warts, abscesses and foot rot. These three problems – proper cleaning after calving, uterine infection and the number of services to settle the cow are very costly to producers as well as the problems of mastitis and leg diseases. These are the three main reasons why dairy producers are culling cows at a young age. It is our goal to keep these cows in the herd beyond the second and third lactations. We want the cows to reach their genetic potential and not to be culled out of the herd just as they begin to reach their peak potential.
Learn More

Benefits of Oxy Blast for Beef Cattle The use of Oxy Blast for beef cattle production is a very important “tool” to improve the quality of the most important nutrient – water. Water is the most quantitative nutrient of the body in any species. Water consumption always determines dry matter feed intake. Water plays many major roles in all of the body’s normal functions. The amount of Oxy Blast to be used in the drinking water for growing and finishing beef cattle ranges from 50 to 100 ppm. The best and most consistent results are achieved at 75 to 100 ppm. For new incoming cattle to the feedlot with challenges from stress, a higher pulse rate of two times normal rate is very helpful for the first week to 10 days. The same amounts apply to beef cows in a dry lot. For back- grounding cattle which are usually on pasture, we usually cannot add Oxy Blast economical and effectively to the dug-out or pond water source. The best water source would be treated water with Oxy Blast pumped to the pasture location whenever possible. Always get the water analyzed to determine the correct amount of Oxy Blast to be used most effectively and economically. For calves on milk replacer use, Oxy Blast 34% at the rate of 2 cc/gal. of milk replacer to achieve 100 PPM, or use 1/2 ounce / 7-10 gal. of milk replacer. Use the same amounts m the calves' drinking water. The benefits from the proper use of Oxy Blast are the same for any age or stage of production in beef cattle. Here are a few of those benefits: All of these factors are very important for beef animals to stay healthy and perform to their optimum genetic potential and providing a reasonable profit for their producers. 0xy Blast is a multi-function product with proprietary formulation to achieve consistent and economical results for beef cattle of all ages.
Learn More

Advantages of Oxy Blast For Swine For Sows Oxy Blast For Nursery Pigs- Oxy Blast Besides improving daily gain and feed efficiency, we have noticed the following by injecting Oxy Blast into the water of finishing hogs: The barns will dean up easier because of the less undigested feed in the manure. 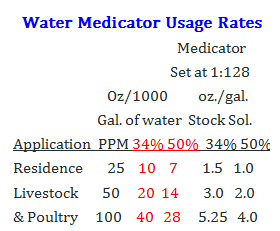